Dorianne and I went to visit our daughter, Grace, who attends CAP21 (LINK), a musical theater conservatory in Manhattan. During our four night stay, we sampled a few restaurants and had some wine experiences, including setting Grace up with a starter case of wine. The restaurants we chose were generally under the radar – not the high-end, but places that interested us and fit our budget. They were generally reasonably priced, actually a bargain, for New York City, but a couple would be considered expensive in other places. Wine was of course on our minds in making our selections. Here is a brief overview of our experiences. 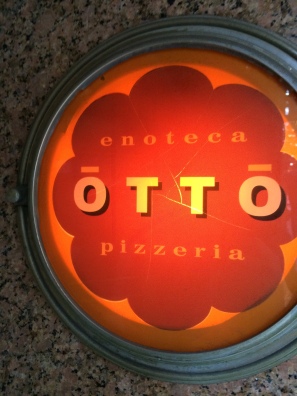 We arrived on Saturday and went to see Grace’s end of the year performance at CAP 21 in the Village. I had made reservations for the three of us and her boyfriend, Kyle, at ŌTTŌ, Mario Batali’s Enoteca and Pizzeria (LINK) on 5th Avenue near Washington Square Park. It was a “meet the parents” dinner, so we wanted something special. While not really expensive, ŌTTŌ is a great experience and has the largest list of Italian Wines that I have ever seen – well over three hundred choices. The three of us arrived before Kyle and we had a glass of wine in the Enoteca in front. We were poured tastes of any by-the-glass wines we wanted before we chose by a very knowledgeable barman. The food was very good in this noisy bustling place. We were seated next to a group of 36 (at two long tables), so that may have affected the noise level. Our wine was a 2011 Soleado Nero d’Avila from Sicily; very tasty – spicy and full-bodied. The service was excellent. I would definitely return.

On Sunday, Dorianne was at a workshop at the Brooklyn Conservatory of Music, so after Grace’s Sunday performance, we took the subway over to Park Slope and met her at Cafe Dada (LINK), a funky wine bar with Hungarian ownership. We had dinner reservations later on a few blocks away. Cafe Dada features a number of wines, several from Hungary, so we had a 2014 Peter Benedek Cserszegi Fűszeres, a crisp and refreshing white, with some appetizers. Cserszegi Fűszeres is the varietal (LINK), which was dry with hints of fruit and minerality. It was a bit unusual, but very refreshing. 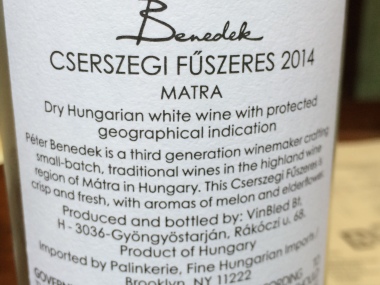 Then it was on to dinner at Rose Water (LINK), on Union Avenue nearby. Our party of 6 included some friends who live in Brooklyn. Rose Water is a tiny little place with a small kitchen just off the entryway. They offer a seasonal menu of locally sourced foods and everything was delicious. The wine list is one of those that is carefully chosen due to minimal storage space – but with a nice selection of wines that fit the menu well. We opted for a 2015 Bonny Doon Vin Gris de Cigare Rosé, since people were getting a variety of dishes. It was a perfect choice (and there were five other rosés on the list). If you are in or near Park Slope, make arrangements to eat at Rose Water.

On Monday, we met Grace when classes ended and headed over to Union Square Wines and Spirits (LINK), from the top-ten list of New York Wine Shops in the Village Voice (LINK). As readers of this blog may know, we took Grace to France to taste wines when she graduated from high school. The idea was to educate her palate so that she was not tempted by the cheap, crappy stuff at college parties. It largely worked, and she gets wine as well as any 22-year-old I know. So a mixed case of mid-level wines was selected at this excellent wine shop, she opened an account, and the wine was delivered two days later. I will blog about the idea of a “starter case” and the contents of this one in a future post.

Monday’s dinner was just the three of us and we chose Maison Harlem (LINK), just a couple of blocks from Grace’s apartment. The Harlem food scene is really taking off, and this place is near the front of that procession. A funky, laid-back place with definite French accents (including the owners, Samuel Thiam and Romain Bonnans and some of the staff). The food is excellent and the vibe is very friendly. There is a bar in the front that gets very lively, and the dining room in the back with live music on this night – a very competent jazzy trio. The wine list is short but interesting. We had a wonderful meal. The owners were sitting at the next table, so it was a nice experience interacting with them (like one of them showing me his smart phone with my minutes-old Tweet about the place). They also own a wine shop across the street. 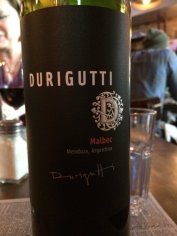 Except for one thing. Our server brought the wrong wine. I have been on a bit of a Cahors Malbec kick for a few weeks, and they had one on the menu. I ordered it, pointing to the listing as I did so. The wine was brought, but not shown to me, and when given a taste, it tasted very good and looked like a Cahors – dark and inky. But when the bottle was put on the table (I was not shown the label first), it had an all black label, which seemed strange. When I examined it, it was an Argentinian Malbec. By this time the server had gone and the wine tasted fine. When told about it later, he apologized and offered to change the wine, but we decided to keep the wine we were served. Otherwise a great experience; and I could have asked to see the label (but I should not have to).

Our final wine-related meal was Tuesday’s lunch. We went to the Amelie Wine Bar (LINK) on West 8th Street, literally a block from ŌTTŌ closing the circle as it were. This little gem of a place offers really tasty food and an eclectic wine list in a mid-Century modern decor. It is very lively at night, there were only a few people there at lunch. There are dozens of wines by the glass, mostly French, but many others as well. We all opted for French wines. The servers are knowledgeable (here, too, most have French accents), and the food was exceptional. I opted for the burger and it was the best I have had in years. There is also a San Francisco branch of Amelie Wine Bar.

We closed our visit with a Broadway Show – School of Rock on Tuesday evening, and jsut snacked before the theater. As always, New York is an amazing place with a dazzlingly large array of possibilities. We chose well, I think, and I know that we missed so much.