The food at Noma changes, sometimes daily. It is based on the seasons, on what has been foraged that morning, on what the chefs are trying to do, and, I am sure, on other factors that I know nothing about. Everything that we had was unique and clearly well thought out. I did not like everything, but I did not hate anything served. There was quite a bit of “sour” taste on the menu, and some on the wine list. There were some dishes that were interesting but not memorable. And there were some that soared. Those experiences were different for each of us at our table for four – Dorianne, me, and friends Ginger and Patricia. Three of us opted for the wine paring, Ginger opted for the juice pairing – a different juice blend comes at the same time that new wines are introduced. She raved about the juices, and we all tasted some and they were very, very good.

The presentations were unique, generally attractive and appealing, and mostly, delicious. There were lots of flowers, some rocks, mushrooms, moss, leaves, dough, lobster, bone marrow, berries, and many things that I had never seen on a plate before.

The restaurant is very nicely appointed, but not flashy at all. Rough-hewn wood, lots of gray colored fabrics and surfaces; you might say that the dining room is understated, as you might expect in Denmark.

The tables are simply set. There is a clear effort to have guests feel welcome and to make the experience as unpretentious as possible. Staff are friendly, direct, and relatively informal. They do what they do very well, are always in motion, but have time for any query or request.

The first three courses are not considered a part of the pairing dinner. We were served a Champagne for all of these courses, a dufour par charles champagne “les instantanes”, which I could not find in an internet search (found the producer, but not this wine). Suffice to say that it was very well made, light and crisp, and you likely will only get it at Noma. The first item served to us was a small bowl of ice topped with turnip and unripe strawberry marinated in Aquavit. There are obviously other things sitting on top of the slice of turnip and the strawberry, berries, flowers and such – there are always other things on the dishes that are not described on the menu, but are described by the server. The server, by the way, will be either one of the wait staff or someone from the kitchen who worked on the dish being served.

This dish, eaten with the fingers, was very tart (Aquavit and unripe things) and the Champagne was a wonderful match, giving a sense of ripeness, but not too much. I was thinking that they know what they are doing. Smiles, oohs and aahs, and photo taking all around the table (I stopped the server to photograph each wine bottle as it was served – they were wonderfully patient). A very good start.

The bread, served in a felt basket, made from native Oland wheat and accompanied by both butter and rapeseed oil was delicious. The basket was refilled at least twice during the meal.

Next came summer cabbage with white currants and a white currant broth that was added at the table. This continued the tendency toward sour, unripened flavors. It could be classified as a soup, I suppose. Again, the Champagne was right there to extend and ripen the experience of the food.

Next, course #3, the first shoots of the season with a scallop marinade, again with the Champagne. The plants were tiny and tender, some of them toasted, and after enjoying the presentation, you mix them all together in the thin layer of marinade and eat them in a few bites with your fingers. The rush of various flavors and the marinade tasting of the sea was delicious. After doing yeoman’s duty, it was time to part with the Champagne. Note: they do refill your glasses as often as you like. 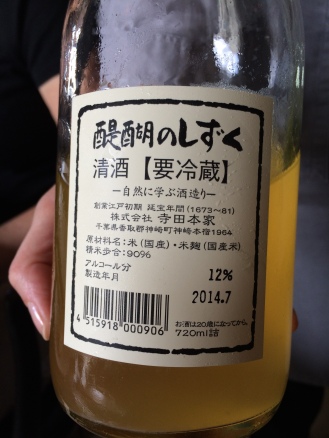 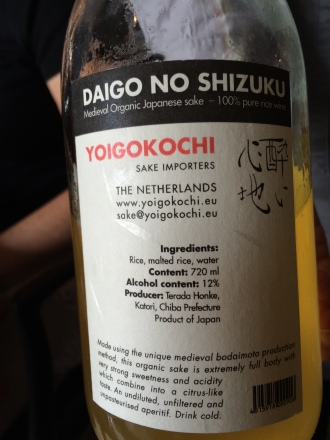 Now, the actual wine pairing begins! With Sake! A 2014 Daigo No Shizuku Terada Honke (LINK), to be exact, which would take us through the next three courses. Full-bodied with a soft and approachable taste; hints of citrus and a long finish.

The first course of the pairing was sweet peas with sliced kelp. There was a cheese under the kelp – like a ricotta but not a ricotta; and nasturtiums in with the peas (we will see more nasturtiums), all in a sauce. Very tasty with a mixture of textures and flavors. The sake went well with this.

One of the most picturesque dishes, the flower tart. Various petals over a vegetable spread and placed on something like a cracker. We ate it like a small slice of pizza. The sake was less successful here, as it was far more tart than the “tart,” so to speak. This experience reminded me of my childhood, sampling most of the flora in the neighborhood. This dish prompted a nice discussion of all of the things that we ate as children that were not from the home larder. A delicious and fun dish.

Next came new Danish potatoes wrapped in a lavage leaf, residing on a bed of two kinds of salt (it was recommended that we not eat the salt). This dish was intriguing. The potatoes, once revealed by opening the leaf, were to be eaten with a sharpened Elm twig (very Paleo). They were warm, soft, and, when touched to the salt, delicious! The leaf was also edible, but had absorbed too much salt to be enjoyable. The sake added a fullness to the experience and was a good pairing for this dish, and it completed its duty with this serving.

The next course was sweet shrimps wrapped in nasturtium leaves with a seafood broth. Very tasty – the shrimp and the leaves were a good mix of textures and flavor. The next wine was 2013 Strohmeier Weiss #6 – Tromen Liebe and Zeit, 50/50 Chardonnay and Pinot Blanc from Austria (LINK). This is really a nice white wine. I have loved the whites (weiss) of Austria since visiting there in 2009. I am a particular fan of Grüner Veltliner, the wonderful white grape so popular there and now being grown in California. But I digress – the Strohmeier has the nice acidity that one expects from Austrian whites, plus, the Chardonnay gives it a fuller mouth feel. It was a great accompaniment to the shrimps in nasturtium. Of course, this could be my appreciation for a more familiar wine after the sake.

Next came cabbage and roses; dried and candied cabbage leafs sandwiched around samphire (sea asparagus) and rose petals. The leaves were crunchy and the middle was soft and creamy. Eaten with your hands. The 2013 Strohmeier Weiss #6 accompanied this dish very well, giving a smoothness to the experience.

So that is the first half of the Noma dinner, nine courses with nine more to go; and five more wines (by the way, no red wines)! Those will be depicted and described in the next installment, Part 3.

7 thoughts on ““THE BEST RESTAURANT IN THE WORLD:” COPENHAGEN’S NOMA – PART 2: THE FIRST HALF OF THE MEAL”